The F-18D is more than just a two-seat trainer that it appearsto be. Instead, the D model has been optimized for the all-weather night attackrole. Unlike the F-18B trainer, the F-18D does not have controls in the rearcockpit. Instead the aircraft has FLIR, TINS, and other systems that allow it toperform its mission. As such, the F-18D is an exclusive mount for US MarineCorps squadrons, replacing the A-6E Intruder in those roles. Though not able tocarry the amount of ordnance and without the unrefuelled range of the olderIntruder, the F-18D is faster and, thanks to its newer electronics systems, justas precise as the A-6. Having commonality in many parts with the single seatF-18 is also a major benefit in these days of dwindling aircraft types andincreasing costs.

The F-18D has proven itself to be a very capable performer inthe last decade with wars and conflicts in the Near East and the Balkans, wherethe Hornet has been called to action. New F-18Ds are still being produced,despite the newer F-18E and F-18F currently being developed. The F-18F isspecifically designed to replace the F-14 as a long range fleet interceptor sois not scheduled to be a replacement for the F-18D. 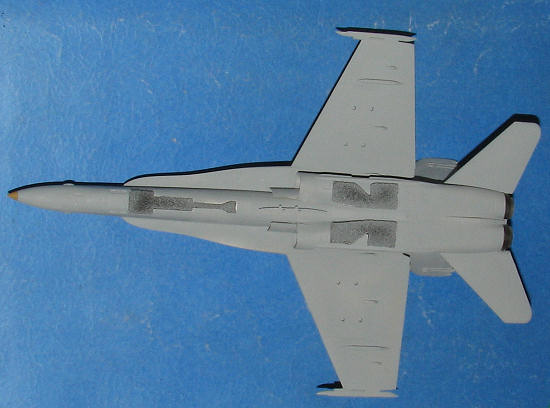 Hasegawa first brought out its F/A-18A / TF-18B kit back in themid 1980s when the Hornet was new in the fleet. Over the years, Hasegawa hasupdated the kit by adding separate sprues to include any of the modifications.They did so with the F-18C and have done so as well with the F-18D. The spruemarked 'F-18C/D' include new fins, a new nose gear door, some 'lumps and bumps'and a new 4-piece pilot. To do the F-18D you get the F-18B sprue with thecomponents for the second cockpit. You'll have to fill the control stick hole onthe back seat.

The rest of the kit is the same as it has been foryears. Panel lines are engraved and the cockpit is relatively complete withseat, stick and instrument panel. Again, instruments for the panel and consolesare provided in decal form. There is a two piece canopy that can be displayedopen or closed as you desire. A boarding ladder is include should you wish toinstall it. underfuselage stores are either the twin sensor pods or Sparrowmissiles and a centerline fuel tank. For an F-18D you'll want to install thepods. Underwing you have four hardpoints. The inner ones carry fuel tanks andthe outer ones are bomb racks. No bombs are supplied, so you'll have to buy theweapons set for these or get them from another source.

Instructionsare excellent as we have come to expect from Hasegawa. There are marking for twoaircraft. Both are painted in FS 36320 over FS 36375 grey as is so common withNaval aircraft at this time. The two units are VMFA-224, coded BM (for BeaufortMarines) from July of 1999. This aircraft has very nice tiger stripes on therudder and Lerex as shown on the box art. The other is from November 1998 and isfrom VMFA-533, coded ED in the inner tail but coded BM on the upper outside fintip.

I have built a couple of these kits (though in the F-18A andB guise) and have found them to be very nice models. Now I am sure that thereare a number of glitches in the kit concerning things like proper antennas andsuch, but these are bound to happen, especially when doing a kit based on anolder kit. There are a number of aftermarket sheets available for this kit ifyou don't like the kit supplied markings. You can even build it as an olderF-18B should you wish. I would also bet that there is at least one etched brassupdate set that will take care of the differences between the kit supplied partsand the real plane

Review kit courtesy of MarcoPolo Importers. Thanks for your support.

If you would like your product reviewed fairly and quickly by asite that averages over 2,400 visits a day, please contactme or see other details in the