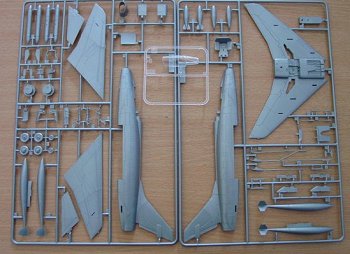 This kit is not new, being a 1999 reboxing of Italeri's F-100D. While one may initially think that this is a reboxed ESCI kit, it is not. The sprue layout is quite different and this kit offers items in it that were not part of the ESCI boxing. It is influenced by the ESCI kit only in that they are both F-100Ds and there are only so many ways to tool kits.

Landing gear are nicely done and the main wheels are two pieces. The kit is not designed to be built gear up, though the modeler could do so with a bit of effort. For things under wings we have two large fuel tanks, a pair of M117 bombs and a pair of rocket pods with the aerodynamic covers. At least I think they are rocket pods and not fuel tanks. No missiles are included. One is offered the later bent refueling probe and the long pitot tube is a single piece that attaches to the lower intake. There is one major glitch on this kit. For some reason, the mold makers added an additional frame line near the rear of the one piece canopy. This will need to be sanded off and the clarity returned to the canopy. 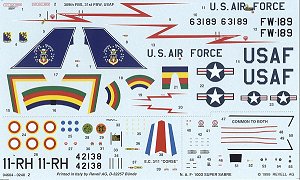 Instructions are Revell's newsprint quality with only Revell paints referenced. There are two markings options. One is the very colorful aircraft from the 31st FBW during a weapons meet. The other is a French plane from EC 2/11 'Corse' in 1972. Both of these markings options will use the original burner can. Decals are nicely printed and matte. For those seeking something else, there are plenty of aftermarket decals to choose from.

Once one finishes gnashing teeth over the canopy glitch and the already open pylon holes, one is left with a very nice F-100D kit. It has enough bits and pieces to do an ANG plane and while it would have been nice to also have missiles, considering that it spent most of its war career dropping things, that is not such a bad deal. This kit is usually easy to find from the 'used kit' market.