Following the success of the MiG-15, it was realized that in order to keep pace with western aircraft, the type needed to be improved. Though similar in layout to the MiG-15, the MiG-17 has a number of major differences. The airframe is larger, the wings are a different shape, it carried more fuel and so on. The early MiG-17A did not have an afterburner, though this was soon added with the later MiG-17F.

The type was also developed into a good fighter-bomber, though typical of Soviet designs, it wasn't able to carry much or it couldn't carry it very far. Still, it was widely exported and there wasn't a Soviet client state in the 1960s that did not have some of these on hand. As usual, these air arms were provided the earlier version and later got the more up to date variants They were easy to fly, easy to maintain and were quite rugged. They also maneuvered quite well and in the hands of a skilled pilot were a dangerous adversary even to much newer aircraft.

I have always liked MiG-15/17 fighters and it is often a mystery to me why I've not built many. In this scale, there have been models by Hobbycraft, this one by SMER, and a newer tool by Hobby Boss. KP decided that we needed a MiG-17 A in this scale so used the SMER kit along with a new fret that provided a replacement fuselage and fin. In fact, this new sprue along with revised instructions and decal sheet were in their own bag and simply taped on a standard bagged SMER kit.

The SMER part consists of two grey sprues that are well done with no real flash. However, the detailing is rather heavy-handed, at least by today's standards. It reminds me of the OEZ MiG-21 I built back in the 'old days'. I also found sink areas on the upper wings opposite the wheel well detaling. The cockpit is built up of several flat sections and contains an eight piece bang seat. The side panels have detail and side consoles and a stick and rudder pedals attach to the floor. An instrument panel is provided with decals for its instruments and also for the side consoles.

A two piece intake fits atop a two piece nose gear well. This will eventually have the cockpit sitting atop it. You will need nose weight and while no indication of how much is provided, there is sufficient room for it. When the cockpit is trapped in the fuselage halves, the tail pipe assembly is also held in place. THere is a separate nose piece that I'd fit on before the guns and after the weight has been installed. Wings are upper and lower halves as is the fin, with single piece tailplanes. The kit provides the later fin for the LIM-6 with the parabrake housing, though the shape seems a bit odd.

A nice pair of drop tanks are included which is good as the long, slit placement area is already opened up in the bottom of the wings. Landing gear is actually quite simple with the nose gear being two pieces that traps the nose wheel between them. The wheels are a single piece so no worries about gluing two wheel halves together.

On the underside are various cannon bits, antennas, lights and the short ventral fin. Canopy and windscreen are separate with well defined frames. The KP tooled sprue has finer engraving and provides missiles and racks, something not used in this particular boxing.

Instructions are well drawn, though a bit on the small side when compared to the SMER kit. All of the color references are Humbrol paint. The decal sheet is nicely done and includes some rather thin seat harness decals along with a main instrument panel decal. There are no stencils provided. All the color and markings info is on the back of the box. You have two bare metal planes. One is from East Germany in the later insignia and the other is a Soviet one with the red fuselage bands applied during the invasion of Czechoslovakia back in 1968. These bands will need to be painted. The third is a Bulgarian plane in two greens and a tan over light blue. The decal sheet is very nicely printed and in register.

So, would this be worth picking up? Well, so far, it is the only early MiG-17 in 1/48 of which I am aware. The SMER kit isn't a bad one and builds into a nice model as you can see from the photo below. However, it isn't state of the art and you need to be aware of that fact before getting this kit. I'm looking forward to building it and adding it to my collection. 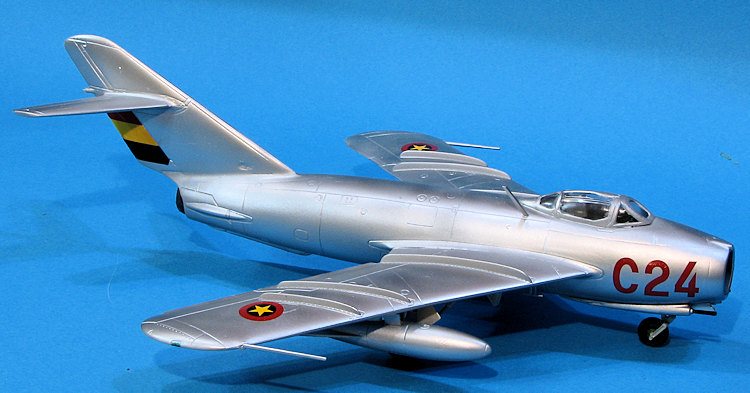 Copyright ModelingMadness.com. All rights reserved. No reproduction in part or in whole without express permission from the editor.

Thanks to me for picking this one up.