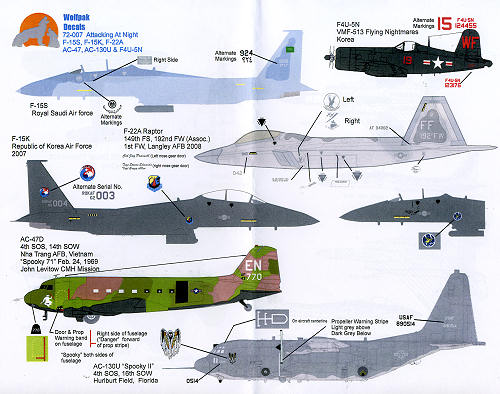 Wolfpack Decals has another fine sheet entitled 'Attacking at Night'. This one has markings for six different aircraft. Well, perhaps that should be nine as the two Strike Eagles and the Corsair have alternate markings. One of the things I really like about WolfPack Decals is they provide extensive background information on each of the subjects on the sheet. When it involves modern jet aircraft, there are also a number of load-out options provided for each set of markings. In addition to the historical background and images, WolfPack Decals provides a list of kits that can be used with the sheet. All of this background material helps you to make the most accurate aircraft model around.

So let us dive right in and see what is on this sheet. 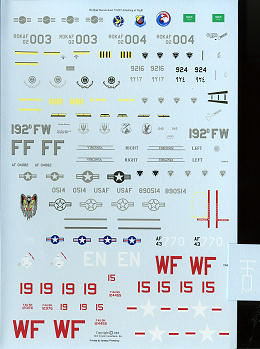 First I'll cover the two Strike Eagles. These are for both Saudi Arabia and Korea. Modelers will know that there really isn't any accurate kit for the Strike Eagle. 1/48 folks have the fine Revell kit, but in 1/72, you have to make due with warmed over F-15D kits. Hopefully this will change, but it means that to be quite accurate, there will need to be some considerable work put into the model just to get to US Strike Eagle specs. Then the additional changes for the 'furriners' will be needed. As an example, both will need GPS antennas and the Korean version has a different lower windscreen/fuselage shape. Both aircraft have optional markings which are basically serials and badges.

Another is an F4U-5N from VMF-513 as flown in Korea. Again, though there are kits, work will be needed to bring any of them up to an acceptable standard. Markings are for two planes, red 15 and red 19.

Next is an F-22A of the 1st FW at Langley AFB. With the recent decimation of ANG fast jet assets (anyone beside me realize that most of the units disbanded have been flying F-15/F-16 aircraft), there has been a move for 'associate' units. This was done with many Reserve units back a few decades back. Basically, those in the now-gone ANG units who want to keep providing service, use the aircraft of an extant USAF unit. For the local 131 FW guys in St. Louis, they are now associated with the 509WG and their B-2s (though half the crew has to be regular USAF). For the folks at the 192 FW, Virginia ANG, it is associating with the 1st FW. I guess this is the way to keep talent while disbanding squadrons. Anyway, this particular plane is marked with the 192 FW on the fin and a 'Virginia' stripe.

Next is an AC-47D of the 4 SOS based out of Nha Trang in Vietnam during 1969. One of only two enlisted  airmen to be awarded the Medal Of Honor was aboard this plane when it was hit by a Vietcong mortar. This had the bad timing to happen just as a flare was being readied. Over 40 hot shrapnel pieces peppered Airman Levitow and the blast of the mortar caused a crewman who was preparing the flare to drop it. Though badly wounded Levitow threw his body on the flare to keep it from rolling around and dragged it and himself to the door where the flare was tossed overboard just  as it ignited. Had it gone off in the plane, it would have destroyed it.

Finally, for those who like really big planes, an AC-130U of the 4th SOS out of Hurlburt Field in Florida. The small addendum sheet has the air refueling marking for the upper fuselage.

The sheet provides all the insignia and major markings that are needed.  This sheet is very crisply printed by Fantasy Printshop in the UK with the markings in perfect register.

Thanks to WolfPack Decals for the review sample. You can order yours direct via Paypal using sales@millcreekconsultants.com for the reference. Free US shipping, Canada and Mexico add $3 and rest of the world add $4.