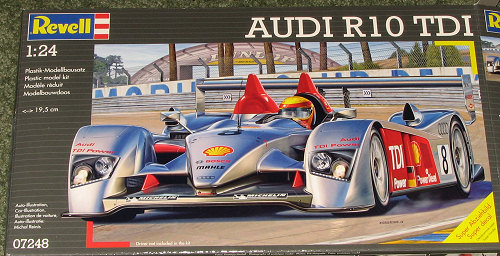 March 21, 2006 Audi achieved Motorsport history on the weekend when its diesel-powered Audi R10 TDI sportscar driven by Allan McNish, Dindo Capello (Italy) and Tom Kristensen won America’s most important sportscar race, the Sebring 12 Hour sportscar endurance motor race at Sebring (USA) – the first victory in an open motorsport event for a diesel-powered car. "Flying Scotsman" McNish showed the potential of the 650-hp V12 TDI engine with a record-breaking pole-position time in qualifying. Because the heat exchanger had to be replaced after the morning warm-up, Capello was forced to start their R10 TDI from the pit-lane starting his chase from the back of the field. It took Capello only half an hour before he had moved from 35th and last position to second just behind the "sister" car of Frank Biela (Germany), Emanuele Pirro (Italy) and Marco Werner (Germany). Shortly before the end of the second hour, the McNish/Capello/Kristensen Audi took the lead and remained at the head of the field to the chequered flag – McNish also setting a new race lap record.

30 degrees Celsius in the shade, high humidity and asphalt temperatures reaching up to 43 degrees, caused especially difficult circumstances on the Florida track which is one of the most demanding in the world.

The Biela/Pirro/Werner Audi R10 TDI that had started alone from the front row led the race for the first two hours but did not reach the finish after it was withdrawn just before one-third distance due to an overheated engine.

Shortly after the start of the race, the telemetry system of this car, that transmits data from car-to-pit, had stopped working. As a consequence, Audi Sport’s engine technicians received no data.

When Werner reported high water temperatures via radio during the fourth hour of the race, the second placed R10 TDI was called into the pits. The team discovered the radiators were completely blocked by tyre rubber. After cleaning the radiators, the temperature sank immediately.

However, Team Audi Sport North America decided - as a precautionary measure - to withdraw the second placed R10 TDI from the race because the engine had been running with significantly high temperatures for an extended period.

For Audi, it was a seventh consecutive Sebring race victory while Kristensen became the first driver to win America’s most famous endurance race for a fourth time, achieving another record after his record seventh Le Mans victory from last year.

And so the Audi R 10 TDI set off to do battle with other top of the line sports racers both in Europe and in the United States where it ran in the American LeMans Series (ALMS) in the Prototype 1 category.

During 2006 the car was seemingly unstoppable, but that was to change in the US during 2007. While the car went on to more victories in Europe, in the US it was the Penske Porsche RS Spyders, running in Prototype 2 (P2) class for cars with less horsepower and less weight that slammed the door on the Audi success, winning nearly all the races run so far this year. It seems the R10s just can't seem to get out of their own way with mechanical problems and just plain being trounced by the lighter and quicker Porsches. Obviously Audi will need to make some improvements in the car as they make a huge amount of power and their straight-away speed is untouchable.

Though there have been resin kits and slot cars of the Audi R10 TDI, this is the first injection molded kit of this car and the first Prototype sports car that has been kitted for mass markets in a very long time. I guess it is to be expected as it is an Audi and it is Revell AG that are producing the kit.

As is to be expected, the kit is just superb. Molded in a silver plastic, the detailing is excellent with no flash, nasty ejector pin marks or sink areas. The kit is not a curbside and includes a full V-12 TDI engine. As with most racing cars, the engine is somewhat buried under intercoolers, other plumbing, and suspension pieces. 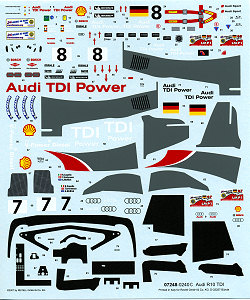 The pan chassis is also well done with all the proper undercarriage ducting and vents, as downforce is quite important in today's auto racing. The kit includes rubber tires to fit over one piece wheels. A nicely done cockpit is also included and the design is such that the rear section is able to be removed to show the work you have put into the engine.

Instructions are well done and provide all the required paint colors and decal placement needed during construction. In fact, it is paint and decals that will probably occupy much of the time building the kit. The main colors of the two markings options, red or yellow, will need to be painted on by the builder. This means a lot of masking as the color will be on the side of the body as well as the rather convoluted head rest area. As Revell AG doesn't want any other paints used, there is some mixing required to get some of the more esoteric shades, though the base color of the car is silver (appropriate for a German car).

The decal sheet is quite large and provides not only the different numbers and team names for the two cars, but also some of the 'carbon fibre' areas of the suspension and interior. Fortunately, the decals are excellent and very well printed. They include a driver's harness assembly, a nice touch for those not into threading buckles on aftermarket sets.

In all, an outstanding kit that is sure to find a home in your collection. It won't be a fast build, thanks to all the painting and decals needed, but one that is sure to produce an excellent replica. I plan on getting this one underway soon so stay tuned.

My thanks to Weber Plastic Models for the review kit and giving me an opportunity to build it. You can get yours from the link.