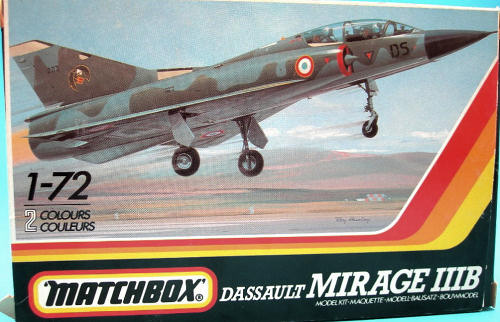 The Mirage IIIB is a tandem 2 seat version of the IIIC that first flew in October 1959 and is slightly longer than it’s single seat counterpart whilst retaining the same strike capability. As with other Mirage variants it has achieved considerable export success, with machines being purchased not only by the French Air Force, but by many other Air Forces including (IIID), , and . (Thanks to the kit instruction sheet)

Molded in grey and blue/green, the 28 parts feature a combination of slightly overstated engraved details (speed brakes look good though) and fine raised panel lines.  As this is an early boxing there is only minute spots of flash and very minor seam lines. A one-piece clear canopy brings the grand total to 29 parts. Matchbox did replicate the unusually configured afterburner for the ATAR 09B-3 engine well.

The kit cockpit consists of two adequate ejection seats, center console and a hint of an instrument panel. Very basic, but as the French wisely painted their cockpits black during the early Mirage days, it will do. Landing gear struts and tires are petit and look good while the covers are too thick so replacing with card or sanding them thinner will give a much better final appearance. It is nice to see all t

he gear wells fully framed in. Surprisingly, no external stores are offered. Assembly is covered over six steps in the well illustrated instruction sheet that has some detail painting notes at the end. This may be an early  Revell boxing as the sheet also has a very nice drawings showing were all the stencils go.

Two decal options are provided. The French Air Force trainer is camouflaged grey and green over silver with only the national insignia (no rudder colours) and the badge for the 328 Centre d’Instruction des Forces Aeriennes Strategiques on the fin. While the Swiss IIIB is in natural metal, it only has the national insignia and full intake lips in red for colour.

The Mirage is a great looking jet that can be done in a plethora of national markings and camouflage schemes in the later engine variants. Matchbox’s IIIC is limited to , , and , though there are some different camouflage options. The only real niggly about the kit is a lack of underwing stores. Other then that, paint the cockpit black, thin the gear doors and find a scheme you like!