The versatile Fw-190A series were used as fighter bombers as early as the Fw-190A-4/U4, a long-range fighter bomber that was used in raids over England in 1942-43. In October 1942, with the growing importance of the Schlactflieger on the Eastern Front, and the increasing unsuitability of the Ju-87 Stuka in this role,

the RLM decided to manufacture a version of the Fw-190 that was optimized for the close-support role. 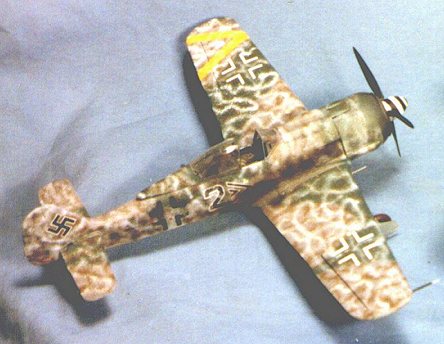 Designated the "F" series, the aircraft standardized the Umrust-Bausatz 3 modification of the Fw-190A-4; this consisted of an ETC501 fuselage rack for a single 500Kg SC500 bomb, or an ER4 adapter that would allow four 50Kg SC50 bombs to be carried, as well as wing racks that would allow for a pair of 250Kg SC250 bombs. The airplane was equipped with extra armor for the engine, oil tank and cockpit, while the landing gear was strengthened to allow higher takeoff weights. The outboard wing-mounted cannon were deleted, with internal armament being two 7.7mm machine guns in the forward fuselage, with two MG151 cannon in the wing roots. The Fw-190F-1 was a simple conversion of Fw-190A-4 machines on the production line which appeared in late 1942, while the first production version of the airplane was the Fw-190F-2, appearing in the spring of 1943, and based on the Fw-190A-5 airframe. The Fw-190F-3, which appeared in the summer of 1943, was based on the Fw-190A-6.

550 of the F series had been delivered by late 1943, when the decision was made to concentrate on the Fw-190G long range fighter-bomber, which was to replace the Ju-87D Stuka. The Fw-190F was reinstated in production in the Spring of 1944, with the Fw-190F-8, based on the Fw-190A-8 heavy fighter. This version also had two racks under each wing to carry SC50 bombs as standard equipment, and was produced by Arado and Dornier. The final version was the Fw-190F-9, which entered production in mid-1944 and differed from the earlier version in having a BMW801TS turbo-supercharged engine that offered 2,000 h.p. for takeoff.

The Fw-190F was appreciated by its pilots - who previously had been flying Bf-109Es and Henschel Hs-123s - as much on the Eastern Front as it was on the Western Front, though several Schlachtflieger remembered that at maximum weight the airplane handled like a truck; they all liked the fact that as a radial-powered airplane, it had greater "survivability" to ground fire than did the Bf-109 with its liquid-cooled engine.

The Fw-190F first entered combat in Operation Zitadel - known to history as the Battle of Kursk. They experienced great success attacking Russian soft-skinned supply vehicles behind the front. The problem for the Germans was that there were never more than 300 ground attack aircraft available for the entire Eastern Front, as opposed to the Red Air Force, which could put 500 Stormoviks into one battle by 1943.

Several Schlachtflieger became air combat expertes, despite the fact their airplane was modified for ground assault. The top-scoring Schlachtflieger experte was Ltn. August Lamber of 5./SG2, who scored 116 kills flying the Fw-190F before being killed in combat in April 1945. There were a number of Schlachtflieger who scored over 40 victories. The Fw-190 might not have been perfect in the ground attack role, but its pilots did have the ability to defend themselves far better than with their previous equipment.

One Schlachtflieger experte was Major Karl Kennel, who rose from the rank of Leutnant Staffelkapitaen of 5./Schl.Gr.1 in the spring of 1945, to Gruppenkommandeur of II/SG2 from August 1944 through the end of the war, leading the unit through the retreat out of Ukraine, through Romania, Hungary and Czechoslovakia, ending in Austria. Kennel shot down 20 aircraft, including three P-51s when the unit began to come under attack from 15th Air Force fighters operating out of Italy in the fall of 1944.

Tamiya's Fw-190F-8 first appeared in 1995, following on to the release of the Fw-190A-3 earlier that year. The kit provides the underwing bomb racks, bombs, and the underfuselage rack with choice of bomb or drop tank. The kit also provides a choice of the standard "flat" canopy or the later "blown" canopy.

As an F-8, the kit as it comes out of the box will create an accurate model. Having determined to do an F-9, however, I had to find a way to create a bigger prop, since the more powerful engine of the F-9 required that. It has been thought heretofore that the wider-blade prop and blown canopy is visual proof that the airplane in a photo is an Fw-190F-9; however, recent research has demonstrated that Fw-190A-8s and A-9s, F-8s and F-9s, could have either the narrow or wide-chord prop, and the flat or blown canopy. The only way to tell for sure is to look at the serial number. I found this out only after taking the prop from a now-redundant Monogram Do-335 and reshaping it to create the wide-blade prop.

As with any Tamiya kit, construction is easy and straightforward, due to good production design, The item that takes the longest in the assembly of the kit is waiting for the paint to dry in the cockpit before assembling it and installing it in the fuselage.

By the fall of 1944, Fw-190s were arriving on the front with wings that were only painted on the lower surfaces over the leading edge, the ailerons and the flaps, with the spar box left in natural metal. Sometimes the landing gear and wheel wells were painted RLM02, or were left in natural metal. I chose to do an airplane with the natural metal lower center wing section, with the gear and wells in RLM02. The upper camouflage was RLM75/81 in the standard Focke-Wulf pattern, with a "scribble" of white paint for winter camouflage over all upper surfaces. By this period, December 1944, the Luftwaffe was not operating from bases on the Russian steppe, and there was not the need for the complete overpainting with white that characterized earlier winter camouflage on the Eastern Front. Now, the aircraft were flying from fields in the Carpathian Mountains, with a backdrop of evergreen forest. The aircraft needed a camouflage that would protect them from long-ranging USAAF strafers, as well as Russian Airacobras and Stormoviks.

I used the kit decals, with the personal markings of the double-chevron for a Gruppenkommandeur and the black "2" for SG2 coming from the decal dungeon.

Once the decals were on and I had applied a coat of Future over the kit, I gave a splotchy "scribble" over the entire upper surfaces, including the markings and insignia, per the color profile of this airplane in Osprey's "Focke-Wulf Fw-190 Aces of the Russian Front," Number 6 in their Aircraft of the Aces series.

The airplane was operating from unprepared landing grounds in the forest in winter, so I gave lots of mud smear to the wheels, landing gear and wheel wells, as well as mud "spray" on the lower wing surfaces and the rudder. Additionally, I gave a lot of dirty exhaust staining, since the BMW801 was well-known as a dirty radial. I put numerous bare metal dings in areas where the aircraft would be worked on, such as the cannon bay covers, the fuselage gunbay cover, the cowling, wing roots, etc. I wanted to do an airplane that had been "ridden hard and hung up wet."

nce everything was finished, I attached the landing gear, prop and placed the canopy in the open position. I used nylon thread to represent the antenna wire. Do remember that, with the blown canopy, the wire was not pulled taut when the canopy was opened, but rather dropped over to one side or the other, loose.

This is an easy kit to assemble, allowing the modeler to concentrate on doing an interesting finish. There are several Fw-190Fs in the color plates of the Osprey book mentioned above, though I do not know of any aftermarket decal sheets that apply directly to the Fw-190F series. Since these airplanes were largely anonymous by late 1944 - with a "lengthy" service life being measured at around 50 hours - it's not hard to come up with the necessary markings from the decal stash.

If you would like your product reviewed fairly and fairly quickly, pleasecontact the editor or see other details in the Note to Contributors.