After many inquiries to the proper color of early Zeros, here are two pages from Model Art #510 and  a translation to help those who wish more info. The images are quite large and so it will take some time to load if you have a slow connection. Translation is under each page.

Many thanks to Lance and Yoshiko for the arduous job of translating these pages. 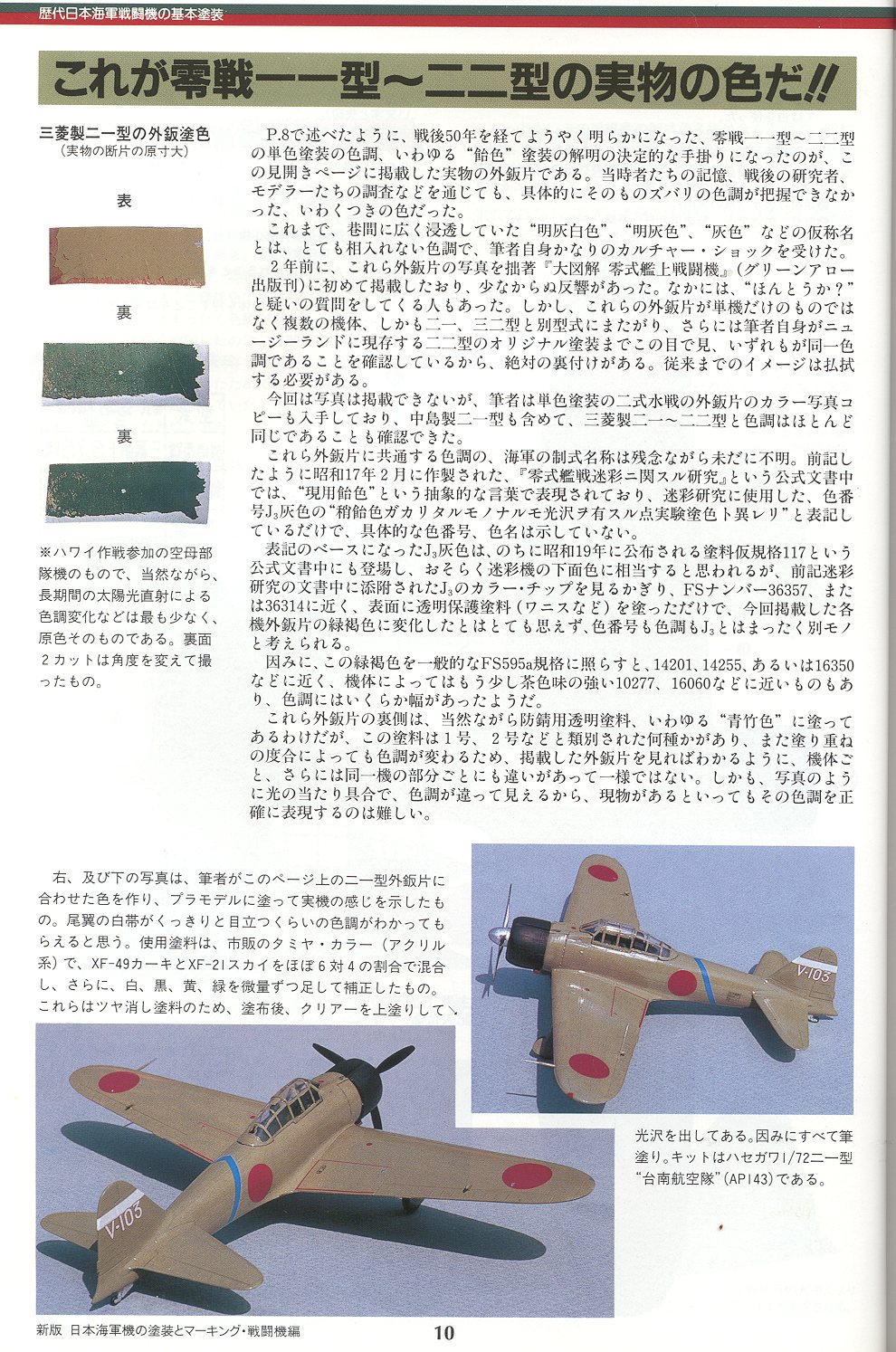 headline
These are the true colors of Model 11 and Model 22 Zeros!

*This sample is from an actual aircraft involved in the Pearl Harbor Attack.  Even though it has been exposed for a long period, the colors on this sample have changed very little, and are the same as they would have been at that time.  The inner surface has been photographed from two slightly different angles, both photos are reproduced here.

caption with model photos
Right and below: The model in these photos was painted by the author using paint mixed to match the color samples above in order to give the feeling of the real aircraft.  I think you will agree that the white tail band stands out very clearly.  The paint was mixed using Tamiya acrylics: XF-49 Khaki and XF-21 Sky in about a 6:4 ratio.  I then added a little white, black, yellow and green to the mix to match the samples.  AS these colors are flat, I then applied a gloss coat to bring out a shine.  By the way, the model was brush painted.  The kit used was Hasegawa's 1/72 Model 21 "Tainan Koukuu-tai" (kit AP143).

text page 10
As was described on page 8 (of this book), 50 years after the end of the war, we have at last identified the color worn by Model 11 to Model 22 Zero-sen.  This color, "Ame-iro", has been brought to light by the samples on this page.  This color has been debated by veterans, scholars and modelers, but until now there was no solid evidence of exactly what color "Ame-iro" was.

Until now, it was commonly thought that the color was along the lines of "Meihaihakushoku" (light gray-white), "Meihai-iro" (light gray) or "Hai-iro" (ash gray), but as can be seen it is an entirely different color.  I myself was shocked by the difference.

The samples shown here were first shown two years ago (2 years before this book was printed) in "Diagrams of the Type Zero Carrier Fighter" (Green Arrow).  At that time, many were surprised and questioned whether the colors were accurate.  However, samples of this color come not from only one airframe, but from several, and the color has been identified on Model 21 and Model 32 airframes.  Further, this writer has personally confirmed this color on a Model 22 Zero found in New Zealand still in its original colors.  Based on this incontrovertible evidence, we must all dispose of the image we have had until now of all-gray Zeros.

While I am unable to include a copy here, I have been able to locate a color photo of skin from an A6M2-N "Rufe", and concluded that these planes, as well as Nakajima-built Model 21s and Mitsubishi-built Model 21s and 22s were all basically the same color.

Unfortunately, the actual name used by the Navy for the color shown in these samples is unknown.  In a paper released in February 1942, "A Study of Camoflage on the Type Zero Carrier Fighter", the abstract name "Genyou Ame-iro" (Actual-use Caramel Color) appears, as well as a statement that the color J3 Hai-iro used in the tests "has a slight caramel tint, but is flat and differs from the tested color".  Aside from this there is no concrete color name or color number given.

Color J3 Hai-iro appeared in Provisional Paint Standard 117 which was promulgated in 1944, and is considered to be the color used on the lower surfaces of camoflaged aircraft.  If we examine the color chip included in the abovementioned study, it appears close to FS 36357 or 36314 and was covered with a clear varnish preservative.  It is quite unthinkable that this color shifted to the color seen in the samples on these pages.  Therefore the color appearing on the samples on here must be a completely different color number and color name from J3.

The inner side of the sample shown here was, obviously, painted with a transparent protective coat, also known as "Aotake".  However, the coating came in several types such as Type 1, Type 2, etc.  Also, the color would change depending on the thickness of the coat/number of coats applied, so on different aircraft, or even different areas of one airframe the color would appear different.  Further, the color appears to change according to the reflection of the light, so even if you have an actual sample it is difficult to say that that is what Aotake looked like. 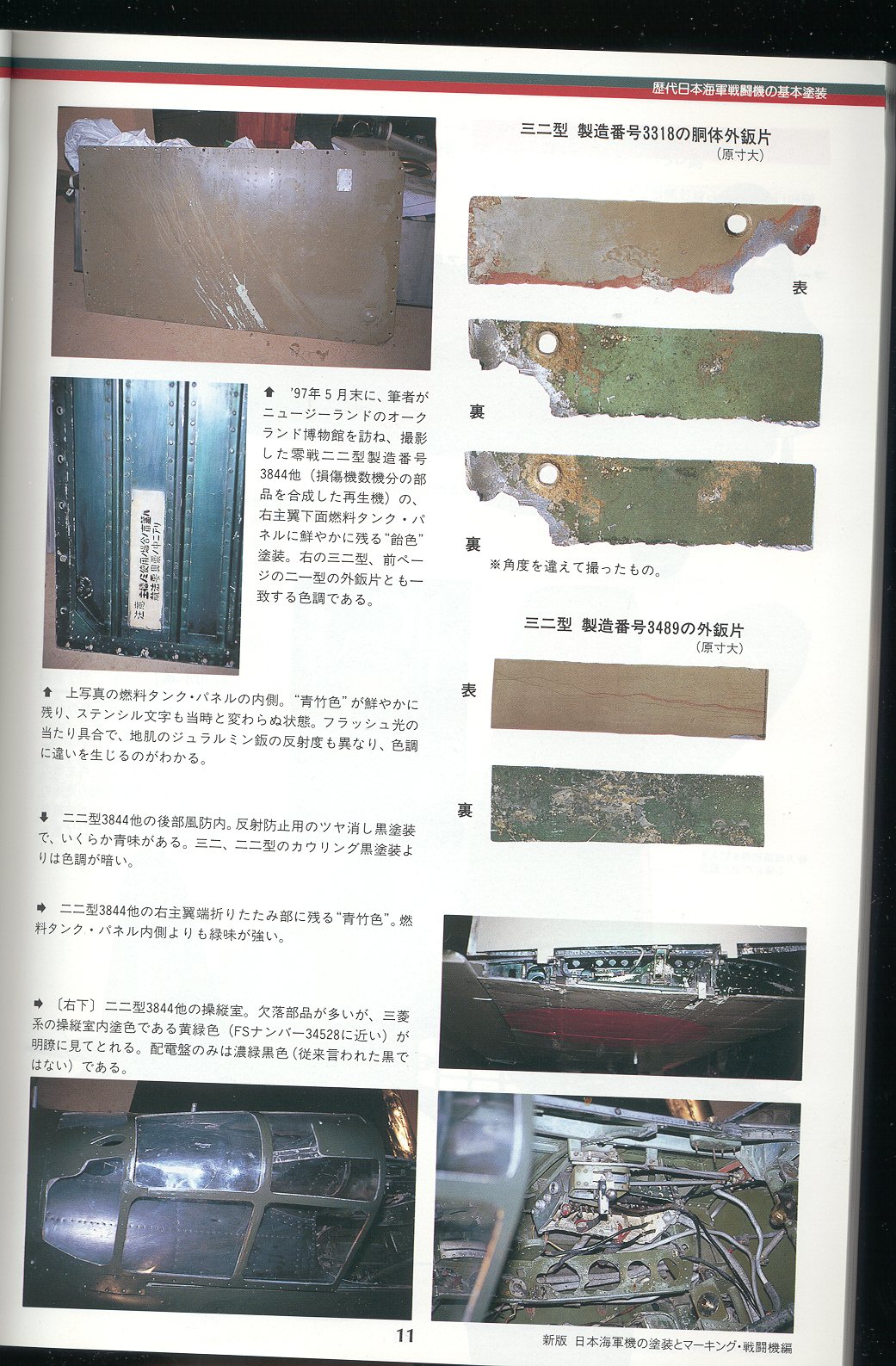 caption top left pic
In late May 1997, the writer visited the Auckland Museum in New Zealand and took this photo of the fuel tank panel from the wing undersurface of a Model 22 Zero (construction no. 3844, but it is actually a rebuilt airframe with pieces from several a/c).  It is in the original "Ame-iro" paint.  To the right is a Model 32.  The paint matches the sample from the Model 21 on the previous page.

caption 2nd from top left
The inside of the fuel tank panel.  The Aotake is preserved excellently.  The stencilling is also original.  The reflections of my flash off the duralumin has caused the color to appear to vary.

caption 3rd from top left
below: the aft canopy of  Model 22 c/n 3844.  The aft deck has been painted in flat black for anti-glare, but it has a blue tint to it.  It is darker than the cowling black applied to Model 32s and 22s.

caption 2nd from bottom
(Right) The wing fold area of Model 22 c/n 3844.  It is in Aotake, but is greener than the inside of the fuel tank panel.

bottom caption
Bottom Right: The cockpit of Model 22 c/n 3844.  Many parts are missing, but the Mitsubishi Cockpit Color, a yellow green close to FS 34528 is clearly shown.  The power switchboard alone is a dark black-green, not black as was thought previously.