It was less maneuverable than its predecessor, the nimble Ki-43, and pilots disliked its poor visibility on the ground, its higher landing speed, and severe restrictions on maneuvering. Yet, it was obvious the Ki-44 was clearly superior overall as a combat aircraft compared to the Ki-43. As an interceptor it could match Allied types in climbs and dives, giving pilots more flexibility in combat and greater pilot confidence than the Ki-43. Moreover, the basic armament of four 12.7mm machine guns or two 12.7mm guns and two 20 mm cannons,(plus a few aircraft which carried two Ho-301 40 mm cannons of limited performance) was far superior to the older Ki-43's two 12.7mm Mgs. These characteristics made the fighter, despite performance restrictions at altitude, a useful B-29 Superfortress interceptor and one of the Japanese High Command priorities during the last year of war. However, like most of the Japanese aircraft flown in the last part of the war, the low availability of properly trained pilots made them easy targets for experienced, aggressive, and well trained Allied pilots flying superior aircraft.

This is the 2012 boxing of Hasegawa's very nice Ki-44 kit. For some reason, the Shoki doesn't get built as much as other JAAF types. Perhaps it is due to the aircraft not getting a lot of press compared to other types like the Ki-61 and Ki-84. Whatever the reason, this is a nicely done kit. You get the usual nicely done interior with decals as an option for the instrument panel. Those who want more detail will opt for a resin aftermarket set, but for most of us, the kit one is more than adequate.

Thanks to the inclusion of two windscreens (one with the telescopic sight and one without), those who know their Ki-44s can build both the -I and -II variant. Th 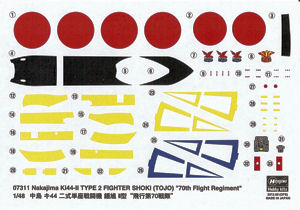 e only real option is for the canopy open or closed. Landing gear is well done and the wheel wells have enough depth to be convincing. The kit also has separate prop blades. These are keyed, but I personally would prefer the single piece version.

The kit provides options for two airplanes, both in unpainted metal with grey-green fabric control surfaces. First is a Ki-44_II hei flown by Major Atsuyuki Sakado in June 1945 and sporting three victories against Superfortresses. The other, for which the telescopic sight is used, is the Ki-44-I koh of Sgt. Sadao Miyazawa in February 1945. This one has a single victory mark for his shoot down of an F6F Hellcat. Decals are very nicely done and include both the wing leading edge stripes and the rather extensive anti-glare panel. My experiences with these features are that the anti-glare panel markings are useful, but one is better served by painting the yellow ID bits.

Apparently sales of Ki-44s are not that great as I got this one on sale for less than the original release back in 1996. This is a shame as the kit is very nicely done and no where near as fiddly as one gets with similar kits from other companies.