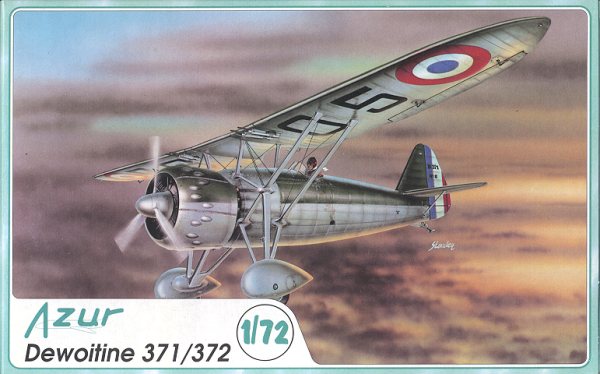 The original D.37 prototype, a parasol wing single seat fighter powered by a 700 hp Gnome Rhone 14K Mistral radial engine, first flew in 1934.  The Armee de l’Aire ordered production models designated D.371 in 1935, with deliveries beginning in 1936.  The 20 D.373’s  were variants with floatation gear for the Aeronautique Navale, otherwise known as the French Navy.  An additional 25 with folding wings were also used by that service.   Lithuania ordered 14 export versions designated D.372, and all of these, along with 10 Ex-French D.371’s, subsequently found their way to the Spanish Republicans during the Spanish Civil War.  These aircraft were later replaced by the more modern Polikarpov I-16’s that became available later during the war. The aircraft were plagued by engine problems with the Gnome Rhone radials,  spending most of their time awaiting maintenance.  A few D.371’s and D.376’s were still in  French service in 1939, but not in combat units.  This airplane may have been outdated during its service life, but it must have been a lot of fun to fly.

Molded in soft grey styrene plastic, this kit contains 31 injection molded parts, one vacuformed windscreen, and 20 resin parts, consisting mainly of the engine, cowling, and cockpit details.   The molding appears to be excellently done, and the outline and details look accurate.  The cockpit interior includes a seat, floor, instrument panel, forward bulkhead, rudder pedals, stick, and one side panel.  The only parts not included are the horizontal stabilizer struts, for which they suggest using stretched sprue.  I used standard rod stock, and they looked fine. For a look at what comes in the box, please visit the preview.

This kit is very conventional in basic assembly, except for the intricate wing and landing gear mounting assembly. Since this is a parasol wing monoplane, the appearance is quite “spidery” and at first glance, it appears to be a very difficult job getting everything lined up and straight.  However, all of the struts are the proper length, and if you mount the wings on the cabane (inside fuselage to center section) struts and line them up correctly, an experienced modeler should have no trouble installing the rest of the struts, especially if the model is painted before assembly.  Since I was only going to build one of these aircraft, I chose a French Armee de l’Aire version with medium green cowling and topsides and silver everywhere else.  Therefore, I could paint and mask the green parts, and then install the wing and struts before painting the rest of the plane silver.  This worked out great.  Additional detailing of the cockpit was really unnecessary, as the kit provides adequate detail.

Parts are provided for two versions, differing primarily in armament and the horizontal stabilizers and elevators, and this should be noted before you go very far with the assembly. The D.372, the major production model, had unbalanced control surfaces while other models had balanced units. The armament differences are clearly explained in the instructions.

There are a couple of areas that require wire rigging, and I use fine electronic wire which is quite effective in this scale. The rigging wires aren’t mentioned in the kit instructions, but not to worry:  they show up quite clearly on the box top painting, so this is easy to accomplish.

I checked the internet and found a number of references for the type.  In addition,  any anthology of fighter aircraft, such as Green and Swanborough’s The Great Book of Fighters  will have a fair amount of information on the type, although I didn’t find a cutaway or interior drawing of the plane.  The instructions give enough information for the average modeler.  There seems to be more information available on the aircraft’s service in the Spanish Civil War than on its French career.

There are two problems that will be encountered when building this kit.  The major drawback I found was the resin engine, which consists of a crankcase and fifteen individual cylinders, which are nicely detailed.  I’d rather see the engine cast in one, or maybe two pieces rather than a myriad of small pieces to lose, even though they do give you an extra cylinder (they are cast in groups of five, so you get 10 for a 7 or 9 cylinder radial, and 15 for a 14 cylinder engine.)  I used super glue and the unit looked great.

Lining up the cylinders took some doing, as the holes were not quite big enough for the cylinder bases, but a drill and file solved these problems.

The other problem is the wing, which is cast in one extremely thin unit..  Two different armament options are provided, one of which requires drilling holes in the leading edge of the wing. I would suggest doing this before attaching the wing to the fuselage, as it is easy to let the drill slip and scratch the wing surface.

There are several options provided in this kit:

This is a good kit and well worth getting, especially if you like mid thirties aircraft.  It doesn’t take a master modeler to get this one together.  I succeeded, didn’t I?    There are some good kits of French aircraft on the market, and this is one of them.  Get at least one.

Back to the Review Index Page 2020