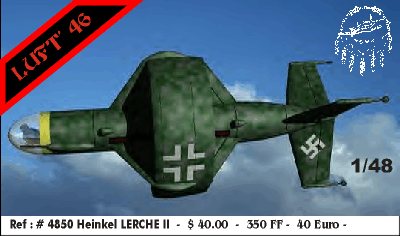 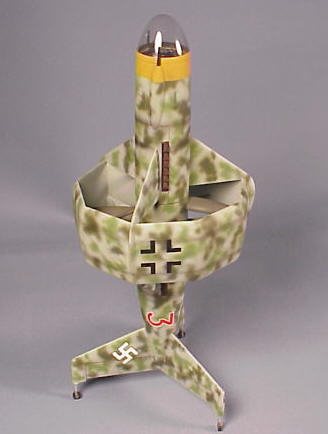 Throughout aviation history, defense of vital factories or areas was difficult at best with a war against superior forces. To overcome this disadvantage, the German aircraft designers set upon the task of creating point defense fighters, or simply an aircraft, which could take off vertically at a moment's notice in defense of a local area. The Heinkel firm designed the Lerche, the most unusual part of this design was the ducted fan design wing. Powered by two Db 605 engines in counter-rotation, it would take off vertically, transit to horizontal flight and back again to vertical for the landing. Needless to say, the idea was so possible, the United States developed a number of post-war craft to explore the possibility, none proving feasible and the idea was dropped. 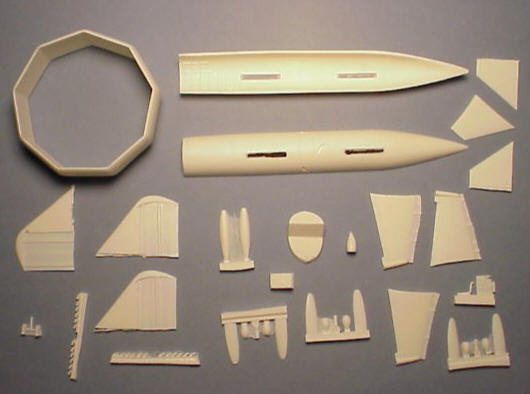 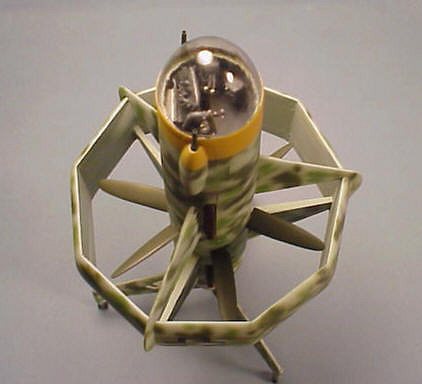 The kit arrived in a colorful box, all the tan resin parts are finely cast with a hint of a sandy finish, and most impressive is the one-piece ducted wing. An interior is provided as is two clear vac canopies should the knife slip. A decal sheet of sorts comes with the kit, however it has a continuous clear coat and transfers must be carefully cut out, I opted for the decals spare parts bin for all crosses. Metal parts are provided for the little idler wheels, all casting was quite good, some small pinholes appeared after a light sanding and need to be filled.

The first thing to do was make sure all flat surfaces are flat, lightly sand them on a glass plate with wet-dry grit paper. The interior was jazzed up with extra boxes and radios but will look nice built up stock, this all fits into the interior with no problems. As a matter of fact, the entire kit was engineered very well and a lot of thought went into it.

You need to be careful with the alignment of the fins. The best way is to make a simple jig to keep them at 90 degrees to each other. Faint 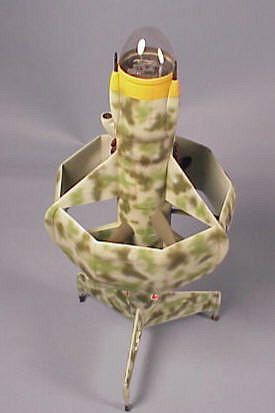 lines are marked on the fuselage for placement of the fins. A bit of clean up is required for the ducted wing to fit well. I used a bit of filler on the wing/fin junctions, but little was needed on the entire kit.

This was looking to be a really cool little kit! The fun part is always the paint scheme, I opted to follow the box art, Mr. Color paints used through out and the finale was the clear dome canopy.

All in all, a very nice resin kit, one that a novice could cut their teeth on with great results, and for the money, $40.00 USD a good deal. It looks imposing on the Luft'46 shelve next to the other oddball Luft'46 items.

Back to Reviews Page2015