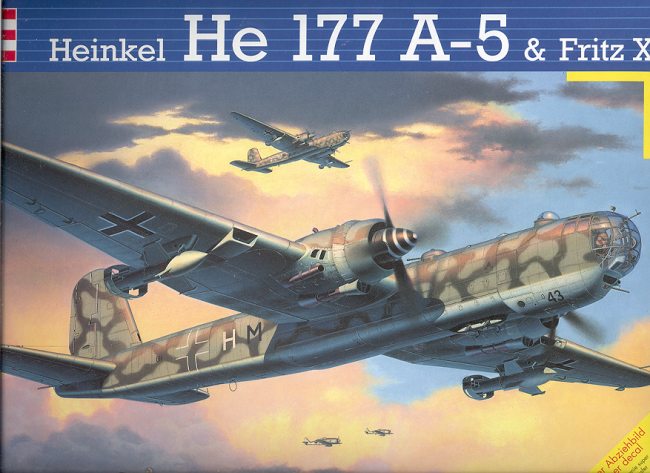 The history of the aircraft of World War Two is resplendent with great successes and great failures. The Heinkel He-177 can be viewed as and aircraft which succeeded in both categories. From the onset of the He-177s' design, trouble was lurking. A heavy bomber with the capability of dive bombing and powered by 4 engines was the design requirement Heinkel submitted to the RLM. Problems arose, as the large aircraft was unable to sustain steep dive angles without experiencing airframe fluttering and failures. The second problem was the use of two DB-601 engines coupled together to drive one single propeller per wing. Many an airplane was lost to engine fires due to the extreme heat generated by the two closely mated engines. It is surprising to note that the crews of the He-177 enjoyed the flight characteristics of the plane despite its hazards. An attempt to use four single engines was disapproved by Goering, but was secretly developed as the He-277.

First off is the packaging, separate bags for everything, clear sprues in one, wings in another, etc. Smooth crisp features molded in RLM 76 blue plastic, engraved and raised where necessary. The cockpit is complete; you won't need resin upgrade here boys. I got the ExtraTech etched set and didn't need to use half the parts.

As with all good things, the downfall of this kit has to be the forward glass canopy part, that big greenhouse was not up to the rest of the kits standard. I could hardly see through it, the mold had not been polished and the resulting finish was like that of a copper bowl shaped with a ball peen hammer. I could have cried. So unless you intend on sanding and polishing it, don't super detail the interior.

The front office was completely furnished; all armor plating, seats, even the toilet/observers seat was there. The seat belts on the seats were a bit cheesy, so here came that etched set. And it all fit so nice, no foul language, no cutting back on the bulkheads, it just fit.

The upper decking and it's turrets are separate pieces, I guess they thought some people might like to peer inside. They were glued in place just because I don't do 'Open Houses'. As I can tell from the entire scheme of construction, this kit has to be a diorama builder's dream.

I might just go on and on about the great fit and details so let's just touch on the tougher spots of construction.

Which paint scheme to do…. Hmmm? I decided on a standard 71/70/76 with the code TM+1F, a plane used to test the glider torpedo BV L10 "Friedensengel".

The actual time spent on assembly was almost as much time spent writing this review. Don't be afraid trying this kit, it will be easy as a Tamiya!

Well, that was a quick review (Yes it was! Ed).

I rate this a 10 on the fun scale, 9 on the detail scale, and 2 on the pocketbook scale. Why do we waste so much money on kits that just don't work, take my advice, buy one or two, you won't be sorry.