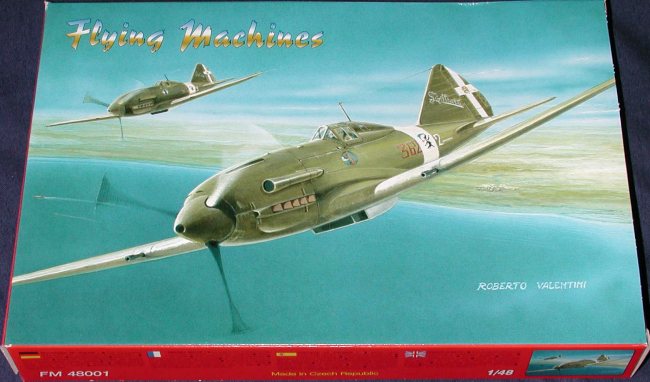 The Reggiane series of fighters - the Re.2000, Re.2001, Re.2002 and Re.2005 - were technically among the best Italian fighters designed during the Second World War.  Obviously based on the Seversky SEV-1 and P-35 - their designer Roberto Longhi having worked for Seversky during the period in which the SEV-1 was designed, before returning to Italy to take the position of Chief Designer at Reggiane - the fighters were in many ways far in advance of those coming from other Italian designers.  Unfortunately, the Re.2000 gained a bad reputation with its "wet" wing that continually leaked; despite the fact this was not used in any of the succeeding designs, the series suffered from dislike by the leadership of the Regia Aeronautica and were never ordered in significant numbers.

The Italian Air Force suffered throughout the war from the fact that the Italian aviation industry had been unable to develop a really powerful engine for use in fighters. Performance of Italian fighters did not meet international standards until the German Daimler-Benz engines were adopted, beginning with the DB601, which powered the Re.2001 among others.  Following this success, the industry was ordered to develop fighters specifically to be powered by the DB605, to take full advantage of this powerful engine.  The Fiat G.55, Macchi C.205V and Re.2005 were the designs that came out of this process.

Longhi began work on the Re.2005 Sagittario (Sagittarius, the Archer) in 1941, and completed the prototype in December 1941. This fighter differed considerably from its predecessors, with greater wingspan, and a longer, more finely-streamlined fuselage, as well as outwards-retracting landing gear which replaced the rearwards-retracting system used on the others.  It also was more heavily armed, with an engine-mounted 20mm cannon, two wing-mounted 20mm cannon, and two fuselage-mounted 13.7mm machine guns.  Unfortunately, the DB605 engine to power the prototype was lost by the Italian railroad system during delivery, and was only found some months later at a railroad station near Milan; this may have been the result of an act of sabotage.

First flight took place May 7, 1942, and resulted in a wheels-up landing that inflicted little damage.  By July 1942, in the official trials at Guidonia, the Re.2005 recorded to maximum speed of 421.6 mph at 22,802 feet, making it the fastest Italian fighter of the war.  Amazingly, by the end of 1942 only three prototypes and one static-test airframe had been ordered while the Reggiane factory stood nearly idle; this was due to the successful flights of the G.55 and C.205, which had both taken place the month before that of the Re.2005 - the loss of the engine had been a substantial setback; Reggiane was setting up to deliver 16 "zero series" aircraft to demonstrate their capability.  Finally, in February 1943, 18 pre-production and 750 production Sagittarios were ordered.

While this was going on, the Luftwaffe had shown interest in testing the Re.2005, and had sent a specially-prepared DB605A and a VDM propeller to Reggiane, who mated these to the second prototype in April 1943.  The German test pilot recorded a top speed of 447.4 mph at 23,950 feet, a performance superior to that of the P-51D, Spitfire XIV, and Bf-109G.

Sixteen "zero series" pre-production aircraft were delivered in May 1943, powered by German DB605A engines.  The 18 pre-production aircraft that commenced delivery that June were powered by the Fiat RA 1050 RC Tifone, the license-built version of the DB605.  The German-engined aircraft demonstrated superior performance with their more-reliable engines.  Eleven of the 18 were re-engined by the Germans with DB605As and equipped with VDM props after the Armistice, before being flown to an uncertain fate in Germany.

Ten of the "zero series" Re.2005s were delivered to 362nd Squadriglia or 22nd Gruppo in Naples in early June, 1943.  On June 28, they were flown to Sigonella, Sicily, to oppose the Allied landings on the island.  Four days later when they were withdrawn, only two of the Re.2005s were flyable.  On July 31, 362nd Squadriglia received ten pre-production Re.2005s.  By the time of the Armistice that September, only two Re.2005s were left, neither flyable; the squadron had recorded no victories during the period of its equipment with the new fighter.  Squadron personnel burned to two survivors to prevent them falling into German hands.

The Re.2005 is proof that the Italian aviation industry was capable of designing and producing fighters that were the equal of any used by their opponents.  Unfortunately, Italian industry and political-military leadership were so incompetent that this ended up meaning nothing.

Please follow this link to read a preview of this kit and see what is in the box.

As I opened the box, I recognized the source of the model:  MPM, who produced the Re.2000 and Re.2001 for Classic Airframes at the end of 2001.  This kit has all the strengths and weaknesses of those two kits, and my experience building them greatly added to the easy time I had building this last of the Reggiane line.

The first thing I did was cut all of the major cockpit parts, which are done in resin, from their molding blocks and sand them smooth.  I painted them with Gunze-Sanyo H-312 "Light Green," which is a good match for Italian interior green.

Next up, I cut off the molding blocks from the resin wheel wells and sanded them down as thin as possible - to a paper-thinness on the top - so they would fit inside the wings.

I then sanded down the trailing edges of the wing parts from the inside, and sanded out the fuselage in the area of the cockpit to make it thinner.  I attached the wheel wells to the lower wing, and glued the upper wing surfaces on to the subassembly and set it aside.

I then glued the fuselage together, along with the horizontal stabilizers, and set it aside.

I detailed the cockpit parts and painted the instrument panel, then assembled the complete cockpit.  I then glued it in place in the fuselage with cyanoacrylate glue, and then attached the fuselage and wing sub assemblies.  Everything went together easily, and I only needed to use Mr. Surfacer 500 on the central fuselage seam, and the attachments of the horizontal stabilizers and upper wing to the fuselage.  I then assembled the radiator and attached it to the lower wing, and put the model aside for the night.

The next day I sanded down the seams and re-scribed detail where necessary.  The model was now ready for the paint shop.

When doing the Re.2005, one has the choice of painting the model dark green on top and light grey on the bottom, or light grey on  the bottom and dark green on top.  I had decided to do one of the "zero series" aircraft, so there wasn't even a different-colored spinner to do.  I used Gunze-Sanyo H-73 "RAF Dark Green" for the upper surfaces and Tamiya XF-19 "Sky Grey" for the lower surfaces, applied over a "pre-shading" of flat black.  The landing gear was painted Testors ModelMaster Aluminum, and the prop blades flat black with yellow tips. When everything was dry, I gave the model a coat of Future and let it dry overnight.

I used the various number decals provided on the sheet to make MM094356, one of the "zero series" aircraft used by 362nd Squadriglia on Sicily - site of the only combat the Re.2005 likely saw during its service.  Doing the serial number one digit at a time was difficult, but fortunately there are enough numbers provided to screw up a couple and still complete it with replacements. The Cartograph decals went down easily under a coat of Micro-Sol.  The red "Sagittario" with white border on the vertical fin is the main distinguishing item of the "zero series" aircraft from the later pre-production fighters, which had the logo in white only.

When the decals had fully set, I washed the model to get rid of any remaining solvent, and gave it another coat of Future.

I assembled the landing gear and attached it, then painted exhaust staining with Tamiya "Smoke."  Since these airplanes were brand new and look very clean in the photos, I only gave it a tiny bit of scuffing on the wing where the pilot boarded.  I then applied three coats of thinned Dullcote.  When this was dry, I attached the windscreen and canopy, and the model was finished.

This kit is as good as the other two available Reggiane models from Classic Airframes, who will be releasing the Re.2002 "Ariete" later this year.  With that, a modeler can have the entire series of Reggiane fighters in the collection.  While not produced in substantial numbers, these were excellent airplanes that look good as completed models, and are fully deserving of a place in any well-rounded collection of World War II aircraft models.

Thanks to MisterKit for the Review Kit. This and other Italian models can be found at http://www.pacmodels.com

If you would like your product reviewed fairly and quickly by a site that has well over 100,000 visitors a month, please contact me or see other details in the Note to Contributors.