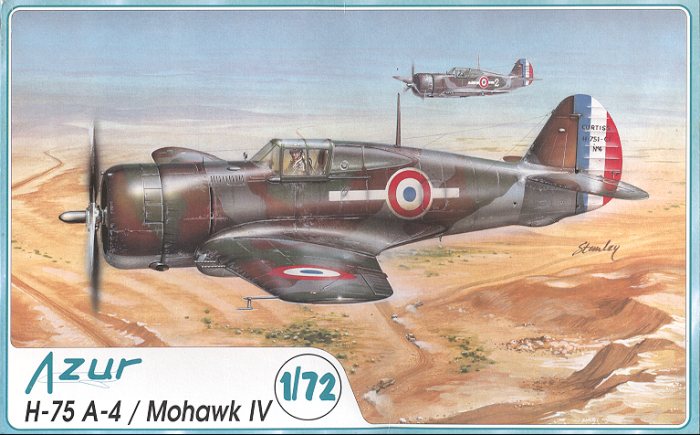 Even though I'm a fan of the P-36, I'm often at a loss about the many variants, mostly involving changes in engines and/or armament, of the various foreign versions of this important aircraft.  So, with apologies to the reader, I will use the kit's instruction sheet history of this particular variant.  "The Curtiss 75-B prototype was one of the competitive designs of the contest in April for providing a single-seat interceptor to the USAAC to replace the P-26A.  The Seversky P-35 won it, but in July 1936 Curtiss received a contract for three service test examples. The USAAC ordered 210 aircraft in July 1937.

Several versions were built.  The H-75A-4 was powered by a 9-cylinder radial engine Cyclone GR-1820-G205A.  Several hundred of the Curtiss H-75 were ordered by the French Armee de l'Air in 1939.  291 Hawk 75A's were taken on strength by the French before the collapse of their forces in June 1940.  They were mainly H-75A-3, but some of them were H-75A-4.  They were in service also under the Vichy Air Force.  Some of the aircraft captured by the Germans were used for training or sent to the Finnish Air Force.  With the fall of France, outstanding French contracts were transferred to the British.  The H-75A-4 was dubbed Mohawk IV by the British."  Many if not most of the French aces that flew combat against the German onslaught in the Spring of 1940 flew Hawk 75's.  They were quite nimble and fared very well against the Messerschmitt 109.

Azur is a Czech company that specializes in doing 1/72 scale kits of French aircraft.  The kit is a mixed media offering having both injected plastic and resin parts.  The injection molded parts are about what one has come to expect from a short-run kit such as this, well molded parts that often exhibit flash and some crudeness in the smaller parts.  The major injected pieces, such as the fuselage halves and the wings exhibit finely etched panel lines.  The resin in this kit, though, is top notch. Also included are vacformed canopy parts, unfortunately including the rear-quarter scalloped clear parts.  A very nice instruction sheet is included with easy to read drawings and with general painting information for various areas.  The decal sheet is by Propag Team and is very well printed, being in register even though it includes the French roundels.  The blue in the French markings is too light however marring what is otherwise an outstanding sheet.  If one chooses to do the captured German trainer version or the Finnish version, the swastikas have to be pieced together.

Construction begins with the cockpit.  The floor and rear bulkhead are plastic and the seat and control stick are resin.  The floor and bulkhead were glued together then test fit into the two fuselage halves.  The fit was remarkably good, especially given my experience with other short run kits.  Very little sanding was required to get an excellent fit.  The interior, including the molded in detail on the two fuselage halves were painted with Model Master Interior Green as was the scalloped areas of the rear quarters.  The seat and control stick were also painted Interior Green at this time.  After this had dried, the various details were picked out using flat black acrylic paint.  Seat belts made out of thin strips of masking tape was added to the seat.  Buckles for the belts were made using thickened silver paint.  The seat and control column were then glued to the floor.  Next a wash of Raw Umber artist's oil paints was brushed over the interior parts.  After this dried dry brushing was done with Interior Green, followed by two lightened shades of Interior Green.

The resin instrument panel is very nicely done and includes molded in rudder pedals.  This was painted Aeromaster RLM 66 (a very nice scale black color!)  After this had dried, the various instrument pips were picked out using a VERY sharp white artist's pencil.  Next a drop of Future was added to each dial to represent the instrument faces.  The completed instrument panel was glued (using "super" glue) to the right side fuselage half along with the plastic tail wheel floor.  The instrument panel's fit was very nice requiring no sanding to get it to fit correctly.  However, the tail wheel floor did require a little sanding to get an acceptable fit.  The fuselage halves were then glued together.  As I imagined, some filling and sanding were required to get everything to close up nicely.

The nose is in two separate pieces with a useable Cyclone engine facsimile done in resin to be trapped between the two halves.  I painted the interior of the nose halves Testors Zinc Chromate Yellow doing the tail wheel well, inner portion of the tail wheel doors, and the inner potions of the main gear doors at the same time.  The engine itself was painted a dark metallic color, washed with Black artist's oil color, then drybrushed with lighter shades of metallics to highlight the cooling fins, etc.  The engine sits too low in the cowling, which would lead to unfortunate results later.

The lower wing is one piece to which two round wheel well inserts are glued.  Then the two upper wing halves were added.  The fit here was very good with only a little filling and sanding being required.  The wheel wells were painted Zinc Chromate Yellow and, when dry, masked using Silly Putty.  That's right, Silly Putty.  It's cheap, it's malleable, it conforms to the wheel wells, and is easy to remove.  Don't, however, use it on a wheel well with a lot of complex detail molded into it.  The Silly Putty can still be removed once painting is done, but the process is much more time consuming.

The engine cowl/nose, wing assembly, and horizontal tails were added to the fuselage.  The tails are only butt jointed to the vertical tail, so some careful filling and sanding were required to get a good fit yet avoid losing that nice detail that I mentioned earlier.  The nose and wing joints require a massive amount of filling and sanding before an acceptable fit could be achieved.

At this time the vacform canopy was carefully separated from its backing material, trimmed and added to the cockpit.  The fit of the main canopy was excellent, surprising me just a little.  Non-fogging super glue was used for attaching the canopy.  As expected, the side panels were a bear to cut out and get to fit the side-scalloped areas of the canopy.  I never did achieve a satisfactory fit despite much filling and sanding.  Again non-fogging super glue was used to attach these parts.

First the canopy was masked using Tamiya tape.  Good stuff!  Next the canopy area was painted Interior Green.  Before Aeromaster sadly went out of the paint business, I had the good fortune to stock up on their French colors in both enamels and acrylics.  These colors are also available from Model Master so don't fear.  The underside of the aircraft was painted Light Blue Gray.  The upper colors were (in order of application): Dark Blue Gray, French Khaki (really a green), and Brown.  French aircraft were painted in some wild blotch patterns with no hard edges between colors.  Using the instruction sheet painting guide I painted the upper fuselage and wing using the above colors in the order listed.  As with any freehand airbrush camouflage application there is the inevitable overspray.  Places where this had happened were noted and the necessary colors reapplied to remedy the problem.  This occurred until such time as I was happy with the results.

The Silly Putty was removed from the wheel wells and then three thin coats of Future were added to the model in preparation for decalling.  I chose to do the first marking scheme shown, an H-75A-4 of the 4th flight of GC (Groupe de Chasse) II/5, North Africa, 1942.  The term "Groupe de uld have resembled bazooka barrels more than French 7.92 mm machine guns!  As much as I intended to and wanted to build this model straight out of the box for review purposes, I found I was forced to use hypodermic tubing to more realistically represent the barrels.  The uniquely shaped pitot tube was cast in resin.  When I tried to remove it from its block, it broke.  I was unable to repair it, so used a thin wire.  Later, after Scott had taken pictures of what I thought was the completed model, I went back and replaced the incorrectly shaped straight wire pitot tube with one made from microsolder bent to shape.

The propeller and its hub were one piece but had a lot of flash on the blades.  This was carefully cleaned up, the hub painted steel, the blades painted black, and, when dry; the propeller was glued to the shaft.  Because the engine sat so low in the cowl, the propeller just doesn't look right to me.

Now, a sad story.  After finally completing what turned into a long-term project, I carefully placed the model in a box with lid on it in anticipation of taking it to an upcoming meeting.  Later I was moving some books when one fell on the box top!  Quickly assessing the damage, I found that the left tailplane had separated from the model.  Easily fixed, right!  Wrong!  As I was gluing the tailplane back in place the right main gear, only butt jointed remember, decided to part company with the model.  After much internal discourse I waited a few days before trying again.  This time I used the paper clip method (see Scott's excellent article on how to do this) to reattach the recalcitrant gear.  Finally, complete.  A contest model?  No, but it does build into an excellent representation of a nice aircraft.  If you have patience, this kit can be built into a beauty.  Recommended.