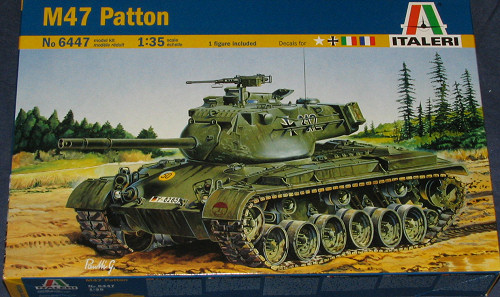 Development of the M47 Patton Medium Tank began in 1948 when the Cold War was just beginning and the U.S. faced a severe shortage of medium and heavy armor. The major improvement over earlier tanks was a stabilizing unit for the main gun and increased firing capacity.  Over 8,600 M47 Patton tanks were produced by American Locomotive Co. and the Detroit Tank Plant in response to the needs of the Korean War. Too late to see service in the war, it was heavily exported to NATO nations.  In US service the M47 was quickly replaced by the M48 entering service in 1953.

The war record of the M47 shows use by Jordan, Iran and Pakistan mainly. A few French M47 saw limited action as part of the expeditionary force in the Suez crisis in 1956. The Jordanian M47, being used in the West Bank territories were no match against the IDF during the 1967 Six-day war, however many M47 were lost mostly due to IAF air superiority. Pakistan used its M47 against India in the 1965 conflict without much success.

To many, this kit is an old friend. It was one of the first military kits I built back in the mid-1980s and have to say that the kit has held up extremely well. An inspection of its olive drab plastic shows that there is literally no flash, a few sink areas on hatches and a few other spots that may be a bit difficult to fix, and the usual ejector pin marks. Most of the latter will be hidden once the kit is finished.

I know some don't like the vinyl tracks, but back when this kit was developed, that is what was in vogue. 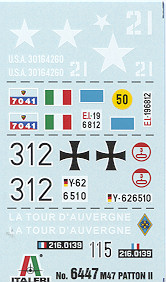 It really isn't impossible to paint and many modelers prefer these. Also included in the kit is a figure to add some atmosphere. There are alternative muzzle brakes, one can add side skirts, and one can pose the hatches open, though there is no interior. An engine face is provided so that one can see something in through the grills.

A nicely detailed gun barrel is provided along with the usual plethora of tools, grab bars, light protectors and a nicely done .50 cal machine gun. Much of the kit part count goes into a very nicely done suspension with individual road wheels and return rollers. The lower hull has all the appropriate hatches on the bottom along with an Italeri logo that most will sand off at the first opportunity.

Instructions are well done and probably the same ones used over the years, but with the inclusion of Model Master paint references. Generic names are provided for those unable to get Model Master products. Markings for four tanks are provided, all of them in Olive Drab. A US 143rd Tank Battallion, German Army 2nd Panzergrenadier Division, Italian Divisione Ariete, and French Division Blindee 'Trier' make up the four options. The sheet is well printed and should provide no surprises.

Always good to see nice kits reissued. The Patton played an important part in the armies of many nations during the Cold War and was a bridge between WWII tank designs and the more modern vehicles. As with many Italeri kits, it is well detailed and a most pleasant build.

and DLV Company for the review kit. You can find Italeri kits at your favorite hobby shop or on-line at www.testors.com

If you would like your product reviewed fairly and fairly quickly by asite that has over 300,000 visitors a month, please contactme or see other details in the